Researchers from India and Italy have discovered a new plant species of the Sahyadri globe thistle, Echinops sahyadricus, from the Rajgad Fort area in Pune district, which is located in the Sahyadri hills in the northern Western Ghats of Maharashtra.

The newly discovered species, under the genus Echinops (spiny thistle) and an erect branched flowering herb with stout stems, is endemic to western Maharashtra and found only on a few open hilltops in the northern Western Ghats.

The discovery by the Mumbai-based botanist Sushant More from Sathaye College, Vile Parle, Mumbai, in collaboration with Fabio Conti from the University of Camerino, Italy, and Harshal Bhosale from the Bombay Natural History Society (BNHS), Mumbai, was published in the Nordic Journal of Botany last Friday.

The new species is distributed from Salher in Nashik District, which is located in the north and south of Kolhapur district, in the northern Western Ghats and grows mostly on open mountain slopes from 800 to 1400 metres (m) above sea level.

It grows during monsoon – between June and September — and flowers bloom in November. The fruiting occurs in December.

“The importance of this discovery highlights the hidden treasures of the Western Ghats in Maharashtra and infrastructure projects such as road widening and construction activities along these forts could affect the population of the species,” said More.

Researchers said the new species was unique due to the size of its composite inflorescence because a large number of small flowers clustered together. “They measure up to 9 centimetres (cm) in diameter, which is relatively large compared to other Echinops species around the world,” said More. “There are about 130 species of Echinops in the world, out of which five species are found in the country and two in Maharashtra alone. This species is named after the Sahyadri hills,” he added.

The new species is similar to other species found in the country such as Indian globe thistle (Echinops echinatus) and the great globe thistle (Echinops sphaerocephalus). “However, we can distinguish the new species based on its unique size, inflorescence, arrangement of phyllaries (spine-like bracts) around the floret (smaller flowers making up the main flower head) and type of leaves surface,” said More.

In India, Echinops are distributed across the Himalayas and neighbouring areas, while a species is endemic to Rajasthan. The new species is endemic to Maharashtra. However, the Usnakantaka (Echinops echinatus Roxb) is found across Indian sub-continent, Afghanistan, Pakistan and Myanmar in dry open scrublands.

In October, three new odonate species of Reedtail damselflies (Protosticta species) were discovered from across three states in the southern Western Ghats.

MahaEdu News Administrator
www.mahaedunews.com is a different educational website. It focuses distinctively on emerging as well as leading topics in education. It helps in delivering effective and collaborative solutions to strengthen vast educational system with the help of students, teachers and experts.
Latest Posts
Related tags : botanist 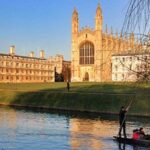